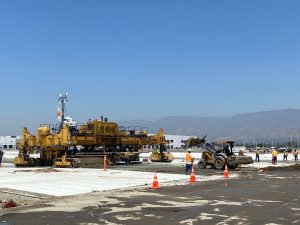 Editor’s note: This is the next in a series of news articles by SBD International Airport that will span the coming months, exploring the 20-year history of AllianceCalifornia, a partnership between the Airport, the Inland Valley Development Agency, and Hillwood, a Perot Company. AllianceCalifornia is transforming the landscape of a community devastated by the closure of Norton Air Force Base by building strategic alliances from the ground up and taking the region towards its future as it responsibly builds on its rich aviation past.—sbdairport.com/news

August 13, 2020 – San Bernardino, CA: The new Amazon Air Regional Air Hub under construction at SBD International Airport is already contributing to the prosperity of the Inland Empire. Building an advanced air cargo facility from the ground up requires highly skilled labor—and lots of it. Electricians, carpenters, plumbers, engineers, and other specialist trades partake in a workforce of more than 1,000 skilled professionals working on this important project that will shape the local economy for decades to come. That’s welcome news for local families, notes John Husing, CEO of Economics and Politics, Inc. “These new local construction and logistics jobs offer a chance at upper mobility to the middle class for a large number of local workers.” The project broke ground in late December 2019, and construction is anticipated to last through the end of 2020.

Once completed, this air cargo hub will create 1,700 new permanent jobs in its first year of operation, a number which is estimated to swell up to 3,800 when the facility is fully operational. With a 35-year lease, the privately-funded AllianceCalifornia project will boost the area’s economy for years to come—bringing thousands of permanent jobs, launching aviation careers, enhancing local infrastructure, and contributing billions of dollars in revenue and taxes. In addition, Husing commented, the project will reduce truck trips and pollution on the heavily congested I-10 freeway as cargo will no longer have to be driven the 25 miles or more from Ontario International Airport to the numerous warehouses near San Bernardino.

Key elements of the new regional air hub include:

• A 658,500 square-foot air cargo facility with parking positions for 14 aircraft, 2000 cars, and 380 trailers
• 41 acres of structural aircraft ramp
• Two 25,000-square-foot buildings for equipment maintenance
• Two bridges to directly connect the air cargo hub to the Third Street corridor
• Much needed enhancements to the landscape along 3rd Street including sidewalks, street lighting, and improved roads and intersections

“Without a single taxpayer dollar or cost to the airport, the Amazon Air Regional Air Hub is bringing jobs and opportunity back to our local area,” says Mike Burrows, the Airport’s Executive Director. “This project represents the successful culmination of our long-term public-private partnership, which has far exceeded the initial goals we set over 20 years ago. By creating thousands of permanent, quality local jobs and attracting a mix of Fortune 50 to 500 companies to co-locate here, the project will continue to support local families and help revitalize the Inland Empire economy for decades.”
About SBD International Airport: Located approximately 60 miles east of Los Angeles and within 30 minutes of more than two million people, the former Norton Air Force Base was converted to civilian use in 1992 and later became certified as a commercial airport by the FAA. The Airport offers a full range of services and facilities to support air cargo operations, general aviation, and maintenance repair and overhaul (MRO) businesses. SBD is positioning itself to provide domestic and international passenger service. www.sbdairport.com
About AllianceCalifornia: Revitalization efforts at the Norton Air Force Base, shuttered in 1994, gave rise to AllianceCalifornia, the master plan to bring prosperity to the Airport and surrounding region. SBD International Airport, Inland Valley Development Agency, and Hillwood, one of the largest independently held real estate development companies in the nation, collectively crafted the master plan to bring jobs and economic activity back to the region.