Conveniently located—an easy drive to Los Angeles and Palm Springs in Southern California—SBD International Airport provides international visitors with a convenient, upscale alternative to other airports as a port of entry into the United States.

Private aircraft operators can enjoy the benefits of flying into uncongested airspace and landing at our exceptional facility by filing an Overflight Exemption with US Customs. Upon approval, you will be able to bypass customary border airports and enter the country at your new destination of choice—SBD.

Check with Us for a More 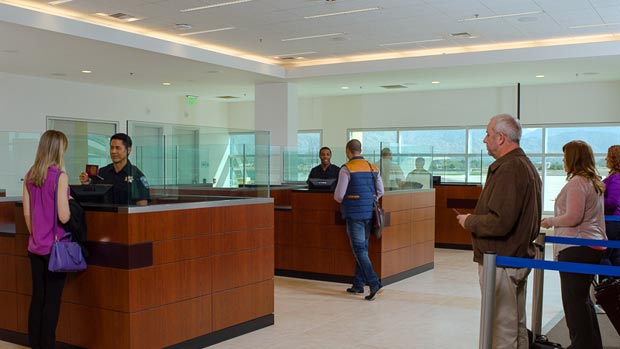 Current U.S. Customs and Border Protection (CBP) policy requires General Aviation and Charter Aircraft to stop at the Southern U.S. Border for clearance. An Overflight Exemption will allow an aircraft to fly past the border to another Port of Entry to clear CBP.

Once an application for a Southern Border Overflight Exemption (BOE) is received, the process may take 4 – 12 weeks. Air ambulances may request a one-time exemption.

SBD is a User Fee Airport.

Making an after hours request for permission to land with an ETA for that night or that weekend:

After permission to land had been granted:

General Declarations for Arriving and Departing Commercial / Charter flights may be e-mailed to:

Why Come to SBD?